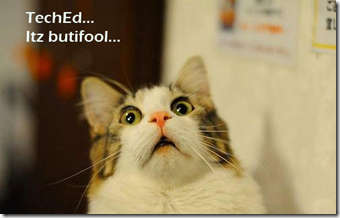 Yep. Speaking. I’m speaking of on TechEd Russia. This time it is more than 3000 people, 150 events and so on and so forth. And I’m going to be a part of this IT feast. I’ll be delivering a session about implementing a Role Based system of infrastructure administration in MS based environment. Hopefully some of you will attend by a chance, though usually English speaking don’t visit our Russian events.

While being quite sure I did what I’m going to describe to my listeners, I’m also aware that every infrastructure has its own features and can give us very different tasks (that’s one of many things why I like to attend Ask the Expert sessions as an expert: some questions couldn’t have crossed my mind unless visitors ask them). That is why I ask your help: if you have some questions about the topic, please ask them. Probably, I’ll create the screencast basing on them.

P.S. Yes, being a speaker is one of the reasons for me to post not very regular updates to my blog for a month or two. Sorry.

The task is obviously necessary to complete on your way to implementing Role-Based Administration concept. And, to be honest, being in euphoria after quick acquaintance with AGPM I thought that it was no deal at all: give an account or a group a membership in some special groups including “Group Policy Creator Owners” and voila – you’ve got it. Aha. Like hell it can succeed! =) This darn group is global and thus cannot be populated with objects from other domains. And moreover, you are unable to change the fact: everything is dimmed.

At least I don’t know a way to change the group’s scope (but I noted to myself to find out everything about it). So we won’t get this easy way. Will we retreat? No way. If we can’t add our object to the group, we can create other group and grant permission to the group directly. What permissions does have “Group Policy Creator Owners” group? As far as I know to create any GPO we need permissions in two places: Policies container in AD and Policies folder in sysvol. So let us delegate the permissions for the brand-new group “Role GP Creator Owners”:

1) in AD on Domain/System/Policies container: 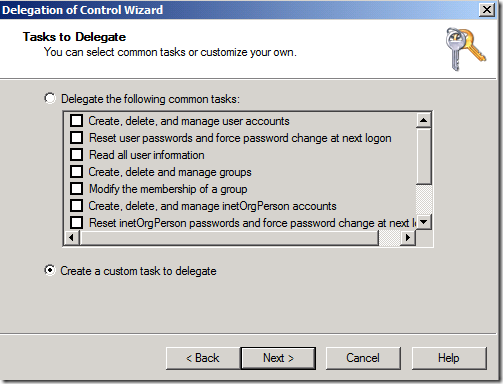 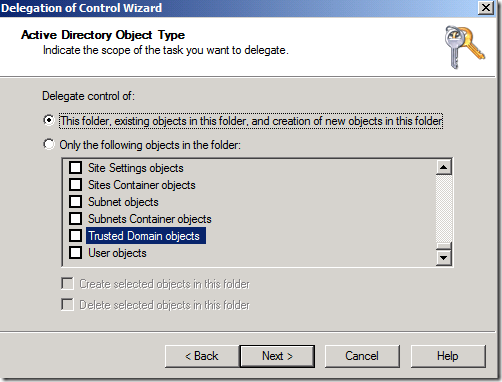 I guess, “Create All Child Objects” is a bit overkill, and we can do better (just a guess), but the “Group Policy Creator Owners” group has these permissions, so we won’t do it worse.

2) now on a Policies folder: 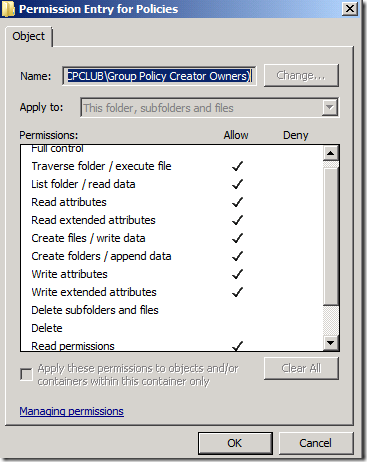 That’ll do the job for us. At least at did for me, but still, I recommend to check it with support if you have it. I’ll definitely do that and fix the article if it needs it.

To be honest, I had been thinking of it as of some unneeded tool for quite a long time before I had a close look on the console and its abilities. I was wrong. It is really powerful instrument to manage or delegate permissions for an application. It is as powerful that I’m only teasing you in this article, before creating one or more big articles about it. Imagine, you need a person to have a full control over some Hyper-V virtual machine, including the right to delete it, but the only thing he or she is not to do is creating snapshots (because those are a pain in the neck, you know). Can you create such a set of permissions? Easy! Do you want to create quite the opposite policy? You are welcome. Do you want to check a user against some complex rules, not only groups? Create your scripts for this matter. What is even more pleasant: it is very role-oriented. Thinking in terms of roles is simple and nice with the tool.

Ok, will tell you me, what’s the trap? Unfortunately there are not one of them. First of them: your application should be written with AzMan in mind. It is true though for many MS applications, like, say, Hyper-V or DPM. But if you use VMM, then it is almost impossible for you to use AzMan with Hyper-V. And VMM has less abilities in the field. And I don’t like the way it has them =) DPM’s AzMan is not yet broken by any “management” software, but, my gosh! It is soooo poor in its capabilities =(

Still, if you don’t use VMM, or use some other app which is compatible with AzMan then I sincere recommend you to take a look at it.

As I have been dealing with some delegation tasks recently, I had to recall some basic stuff. Actually, it took me two occasions of “suddenly missing attributes” to get on the problem seriously and find out the fact that “filtered attributes” can be related not only to RODCs =)

So, the situation generally renders as the following: you are trying to delegate permissions for an attribute in AD through the Delegation wizard and find out that you cannot, because you don’t see the attribute in the wizard. Let me show you an example. Suppose I’m trying to delegate permissions for changing attribute emplyeeID in contact to some group. In the delegation wizard you will see the following dialog:

As you can see there are no employeeID checkboxes to fill in. Where are they? That’s simple enough: they are filtered out from our sight. It is done so that to ease our life, actually: there is too much of attributes for some objects, which usually are not needed. Removing them from our wizard (not only from it) makes it not so overcrowded. “But, but, but… I need it!”, you tell me. Well, no problem: let’s get the attribute back. To do so we need to make some changes to dssec.dat file in %systemroot%system32 folder (make a backup copy!). It has very simple and easy to understand structure: a section for each object we can use, which begins with [<attributename>] and ends with the beginning of the next section. For instance, the section for contact looks like the following:

As you can see, in the section there are lines, consisting from attribute name, “=” sign and a number. In red rectangle you see the property we cannot delegate access to. Why? Obviously it is because of number 7. What should we put in there instead? There is only three options:

restart our ADUC console, then start Delegation wizard and:

I’m back. Sorry for such a long absence: all those conferences and MVP gatherings take too much of endurance, though are very useful and pleasant. But now I’m really back and today we will delegate control over one of our DNS zones (without granting control over the whole DNS server or even AD) to, say, junior administrator. It is obvious that we can just give him necessary rights for the zone using permission tab in its properties menu:

but that still doesn’t give you rights to connect to your DNS server through mmc console:

What shall we do to give the access? Of course we can the junior admin local admin rights, but:

So, what we need to do is to grant him Read permission to the DNS server itself:

And of course don’t grant the permissions directly: create a group, put the user in it and grant permissions to the group.