An email which is timely not sent is worth ten emails sent at wrong time.

Recently, my colleague and I delivered a lecture about personal productivity to other our colleagues. It is based on a course of my friend, and has this slide in it: 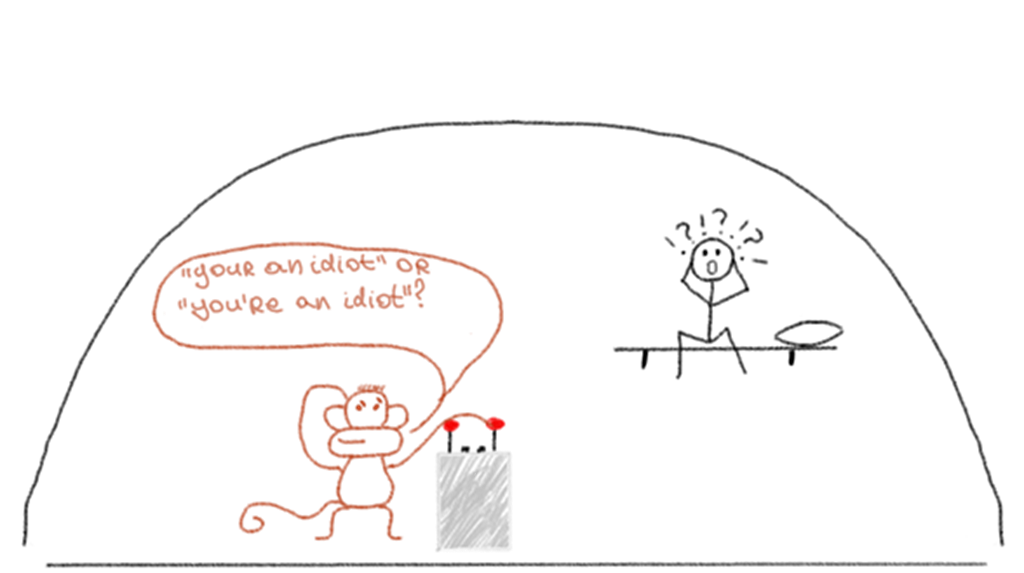 It is (in turn) based on Tim Urban theory about procrastination, but in this particular case is describing what our internal monkey may do with our regular work if we don’t formulate it good enough, or if we otherwise give it too much of free action time.

After that we showed that however hard and unpleasant it is, we can wake up our consciousness if:

And the situation, like pictured in the slide, can be resolved quite easy. I saw the recipe so many times all over the internet, so I was blown away discovering that so many people in my audience don’t know about that trick. And almost no one uses it! And almost all of them do such mistakes from time to time.

What is the trick? That’s easy: delay sending your email. I know how to do it in MS Office Outlook. I know that the similar (but more simple) option presents in Gmail, and I know that there is not such option in Outlook.com. So choose wisely =)

What it does for us? It gives our intelligence time to take over steering controls from the monkey. And write “I don’t completely agree” instead of “you’re an idiot”. Or if you are naturally polite (which I am not), you may remember that not every person needs receive the letter just because you’ve hit “reply all”. Anything can happen if you take just several seconds to reflect on your latest action. Anything.

And here is how to configure it in Outlook 2016 and Gmail.

P.S. I was speaking about video with raccoon and cotton candy in the lecture. Here it is.

Late last year I won Kaspersky Lab’s own “Oscar” for best cinematography. And quite recently I walked away with a “Golden Globe” of sorts (the best bla-bla-bla expert on the company’s intranet portal). I believe this could mean that I have almost succeeded as a manager. Ergo, it is high time I wrote about the trials and tribulations of being one. After four years since I last worked as an engineer, I am in a position to say the following: being a manager is more challenging. And more interesting. But more challenging. Aaaaaand more interesting 😉

a. Back in my engineer days, I could tell the managing director of an entire region that business did not need that new-fangled thing he came up with. That’s how I earned my moniker “Business Does Not Need This”.

b. Now I no longer have any idea what business needs: the old clarity of business vision is gone. Business now seems like something complicated and arcane, and I’ll be damned if I knew what it really needed.

a. Equipment (even computer hardware) is a simple and understandable thing most of the time. If something gets broken, it’s the fault some ham-handed Indian halfway across the globe, and the support team will get it fixed. If not, support will tell you it’s your own fault and ask you “not to do it again.”

b. On the other hand, from our enlightened point of view, regular people are not only hard to understand but sometimes are also real nutjobs. How can a mature and mentally competent person having a legal license for software that needs to be installed on one of the directors’ workstations go and download this software from a torrent tracker? Or, for that matter, after one of the cluster nodes crashes because he did something, he goes to “try it out” on the other three.

3) And the relationships? That’s something altogether unthinkable!

a. When I was an engineer, I could simply tell a person that he was an imbecile.
This was an obvious thing to a point where it did not require any supporting arguments and even helped you get your work done: the guy just left and let you get on with your work.

b. When you’re a manager, it may suddenly turn out (texts are in Russian) that the imbecile is not necessarily the person on the remote end of the conversation. What’s more, even if that person is the actual fool, saying this to his face does not necessarily mean that this would help your work move along. Rather the opposite: your work will hit a dead end because now your job is not interacting with a server (which is much easier when you are left alone to whatever you’re doing) but with that particular hypothetical “imbecile”. So when you call him like that to his face, he will lose all interest in you and stop listening, and will instead be mulling on the insult and thinking of a way to get back at you.

4) Selection of toys. This is very similar to the first item on this list, and all sorts of product managers will be able to relate to this.

a. Engineer: “OMG! Check out the features! This coffee maker can also wash your dirty socks!” This is where absolutely anybody who wants to buy a different coffee maker for a third of the price but without the sock washing feature is looked upon like a total idiot.

b. The manager (who was an engineer quite recently and would also like a coffee machine with sock washing functionality) observes all of this with sadness and remembers the requirements of the customer, who clearly said he needed a cheap coffee machine that will not make coffee with an aftertaste of dirty socks, because the customer is allergic to socks.

5) Communication. In our industry, managers traditionally grow out of the best engineers. While this may not be totally right, it is what it is. And what is a good engineer most likely? Right: an introvert (no matter how anti-scientific this may sound).

a. I was the kind of engineer who kept addressing my superior formally for half a year even though everybody else was on a first name basis in the company. I never went to team-building events because “WhatTheHeckAmISupposedToDoThere”. I got to communicate with others a couple times in a year: while speaking at MCP Club or other events. Excellante!

b. Now I’m a manager. As one of my subordinates aptly said: “You’re a manager. For you, shutting up is like cleaning up your desk.” Communication takes up to 80% (and sometimes 100%) of my time now: phone, email, meetings, simply walking down the corridor. As a manager, you learn to communicate so that even your simple “yes” would not sound like “get lost”. You learn to communicate even when there is no topic for communication. You have to master this darned smalltalk. And you keep on communicating in such manner as to be heard. Incidentally, this is important because:

6) It does not matter what you say; what matters is what they hear.

a. An engineer says what’s on his mind and thinks that’s enough. “But I told you that the firmware had to be upgraded. What do you mean it doesn’t read “downtime” for you?”

b. In reality, people lose some of the information even before we start talking to them. In lieu of an explanation, here’s this old meme:

Those who consider this a joke never had to take 40 minutes to write a four-line email.

7) Last but not least: both a good engineer and a good manager read a text all the way through before forming an opinion on it. This article is not about an engineer or manager, but about a good high-earning employee as opposed to a bad low-earning employee who is bad for the team. It’s no simple task being a good professional in whatever you do. Take care 😉